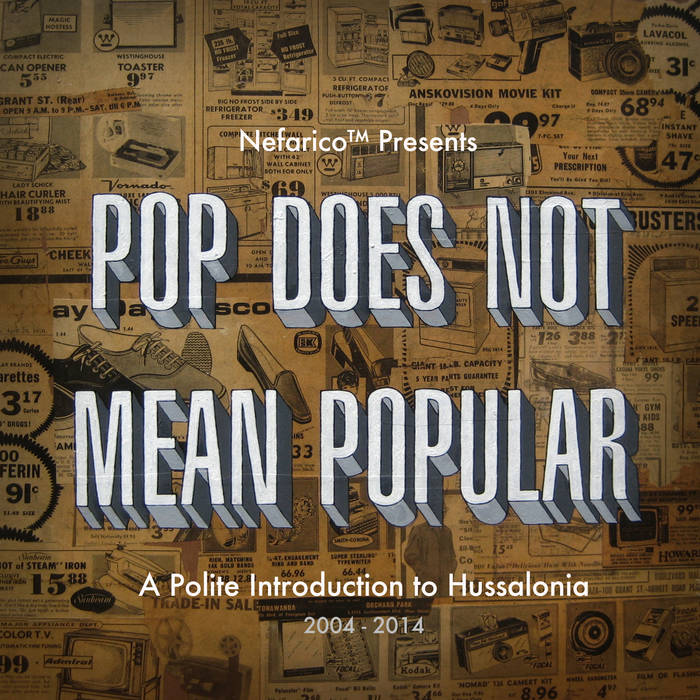 bloodscout2016 heard of you from 99% invisible. short songs but enjoyable.

These twenty songs were selected from a ten-year period (2004-2014), with a focus on material that stays true to the Hussalonia founder's vision for the future of Hussalonia. The opening track, "The Hussalonia Anthem," was written expressly for this compilation and appears on no other release. Each song has been remastered from the original mixes, with several songs remixed for improved fidelity. If you are new to Hussalonia, this is an ideal place to start. If you are already a Hussalonia fan, this is a great collection of the founder's favorite compositions, all newly remastered. Definitely worth the price of admission.

Hussalonia is a pop music cult owned by Nefarico,™ makers of fine luxury soaps. The man behind Hussalonia, known only as the Hussalonia founder, operates under the belief that pop does not mean popular. This rejection of pop’s original definition seems fitting, as Hussalonia has been writing and recording finely-honed pop songs in complete obscurity since 1997. For Hussalonia, pop music will not lead to popularity with the masses, rather, it is a mindset, a way of life, an aesthetic pursuit.

Another guiding principle of Hussalonia is to follow the muse blindly. While Hussalonia primarily makes what the average record store clerk would call power pop – music influenced by ‘60s beat and ‘80s post-punk – it has also made albums of experimental sound collage, metal, robot singers, lo-fi folk, national anthems remixed, and more. This collection, however, omits the adventurous aspect of Hussalonia’s career, focusing instead on accessible songs – or at least as accessible as Hussalonia gets; most of these songs are a mere two-minutes or less.

In 2011, Hussalonia was purchased by Nefarico.™ It was under this ruthless corporate buyout that the Hussalonia founder found himself no longer able to use his real name in association with his music. Now under strict contract, Hussalonia is regularly forced to record commercials for Nefarico™ products.

All songs were written, performed, and produced by the Hussalonia founder except: