Deep in a Donut Dream 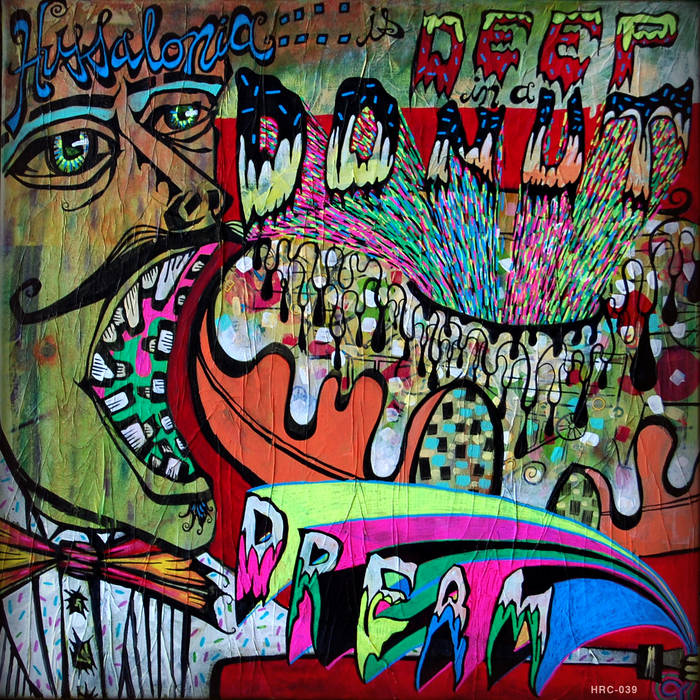 A very special thanks to Rob and Jonathan whose contributions to this record cannot be overstated.

Deep in a Donut Dream was recorded using a process the Hussalonia founder calls “ghost-tracking.” It involves erasing the foundational guitar and vocal track after the basic overdubs have been completed, leaving a void at the center of the song. The effect is that the remaining basic tracks respond to cues that no longer exist. New vocals and ornamental overdubs are then recorded on top of this new arrangement, pulling the song into an unintended direction. It is a technique that the founder has used before, but not to this degree. Here, drums were repeatedly improvised over the original demo track, creating a random cacophony that, after enough overdubs, started to make sense. Consequently, each song on Deep in a Donut Dream contains no less than ten percussion tracks (all played by Hussalonia veteran Rob Lynch) with most of the song’ s chordal structure implied by Jonathan Hughes’ s bass. The mood cast is unsettling, at once desperate and celebratory. But like all Hussalonia projects, the album ultimately adheres to many of the conventions of pop music – short melodic refrains sung over a repetitive and formulaic chord structure. It is so that, after a few listens, the fog clears, and through the clutter, you see an old friend.

Additional Notes:
Both the best and worst part of working the overnight at a copy shop is that you are all alone. It's great because you can put the ragtime station on and walk around as if you're in a Charlie Chaplin film, all sped up like. You can spend hours making things like fake books or elaborate mix CD covers for friends. You can howl in a public space and there is no one around to think you're crazy. It has a kind of after-the-ball feeling. You vacuum up the paper hole punch pieces like you'd sweep up confetti. The piped-in music, once background to the din of voices and industry, now resonates through the empty, fluorescent-lit space, background to nothing at all. But it's also awful because you can never leave or truly take a break without the worry of someone coming in. Once you're there, you're stuck there. And if you didn't bring a lunch, you're not having lunch because no one delivers in the middle of the night.

Invariably, I'd forget to bring a lunch at least once a week. It was during these nights that I would stand behind a retail counter dreaming about Paula's Donuts.

Every night on my way to work, I’d bike past Paula’s Donuts, and man, if it didn't smell good. A sort of hot jelly smell. But I never left early enough to be able to stop at Paula’s. I'd only be able to admire that sweet donut air, my olfactory glands harbingers of frustration and longing. I swear, you could almost smell those donuts all the way on the Boulevard.

I no longer work at a copy shop, but I was recently reminded of a fake book that I made on the overnight when my wife and I were visiting her brother in Cambridge. We were in his living room and there it was on his coffee table, a fake anthology of stories that he allegedly wrote. Having forgotten all about it, I was delighted to pick it up and read through my fake titles and fake blurbs. It was like reading something written by someone else, but with the exact same sense of humor as you. When I came to a story titled "Deep in a Donut Dream," I was reminded of that strange desperation, being stuck in a store in the middle of the night, wishing you could have something that was so close you could smell it. And what a nice sounding string of words, I thought: Deep in a donut dream.

I couldn't help but think of the cruel cyclical symbolism of the donut itself. To be deep in a donut dream is to be stuck in a circle of obsessive thought, sweet thoughts, indulgent thoughts, but unhealthy nonetheless. And how perfect that my job called for me to be constantly duplicating, taking one document and making stacks of replicas with no real sense of completion or resolution. Once you were down to the last copy, with a push of button, more were on their way. It all seemed to tie together, the hopelessness, the strangeness, the desperation, the absurdity, the mind-boggling endlessness of it all. I decided that I would make a record that tried to capture that moment of time. The nights of temporary insanity, staring off into a blackened parking lot, a name tag on my chest, hungry and desperate, thinking about love and donuts.