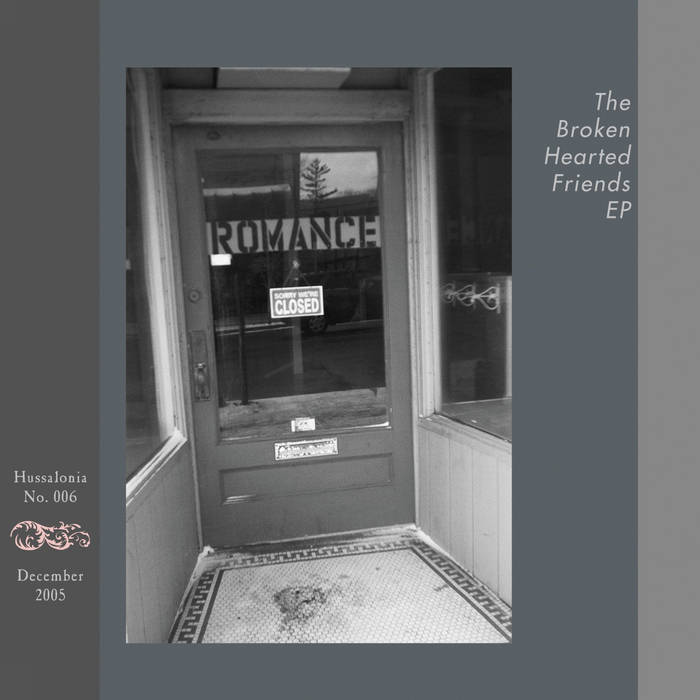 ------------------------
The Broken Hearted Friends EP contains four songs written by associates of the Hussalonia founder. The songs were originally written for bands that have since broken up and dissolved into obscurity. This "covers" album was made out of a frustration that more people should hear these songs, even if it's only twenty-five more people. The recordings were made in one or two takes with a limit of six tracks of overdubs. Little effort was made to hide the noises that occurred while the recordings took place. As a result, you can hear cars driving by, chairs creaking, cats jumping from bookshelves and even the dog's collar jingling in one song. This was done to illustrate the modesty in which these songs have been recorded. These versions are not to trump the originals, but to accompany them on their road to obscurity.

Be sure to visit Beat The Indie Drum (the net label that originally commissioned this EP) and check out their other free releases.

Future Apartments
This song was written for the Buffalo based band The Dollar Canon and released on their Future Apartments EP in 1999. At this writing, the EP is still in print and can be purchased from CD Baby. In addition, they've posted their final album as a free download. The founder considers Dollar Canon members George Skaros and Jay Mazz good friends, even if neither can return a phone call to save your life.

Persuasion
Josh Davis composed this song under the pseudonym Raydeen in the late 1990s. To our knowledge Raydeen has never officially released anything but this song on a tiny Japanese compilation in 2004. Josh is better known for BitShifter, a project in which he composes music using a Nintendo Gameboy. Hussalonia encourages people to contact Josh through his website (www.abandonedarts.com) and tell him that we need more Raydeen.

Your Black Umbrella
Famed lawyer Finney Jean Soda Esq. originally wrote this song for the shelved Hollywood movie Teen Wolf 3 starring One Tree Hill's Chad Michael Murray. The song was to play during the touching scene when the teen wolf shaves his fur and rinses it off in the rain for love interest Hillary Duff. Due to legal complications, the film was never made and the script was sold to an Argentinian film company who, after rewrites, felt Finney's song was no longer appropriate. Finney produced Hussalonia's 2004 release Percy "thrills" Hussalonia and is currently working on a children's television show called Hey, That's My Baby Seal!