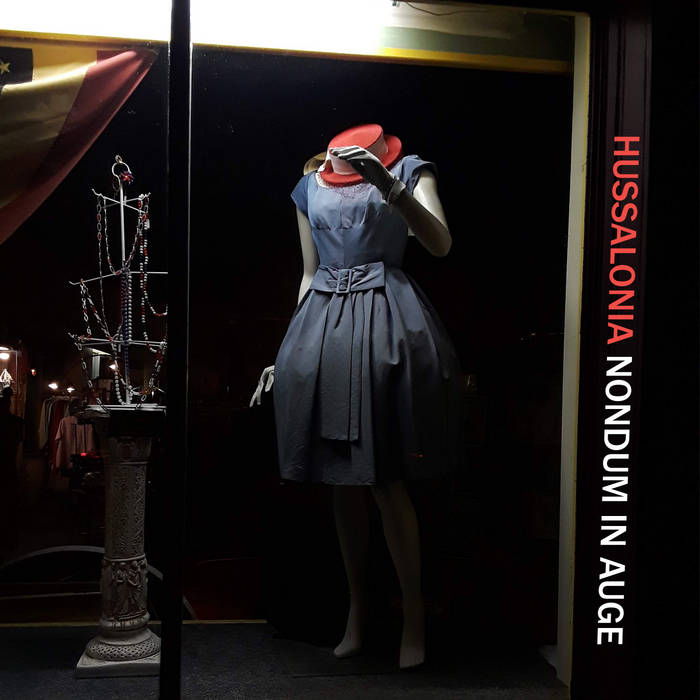 Since 1997, Hussalonia, a self-proclaimed pop-music cult, has been quietly releasing esoteric and eclectic albums and EPs from the solitude of bedrooms, spare rooms, and basements. It is largely the work of one conceptual artist who, owing to a contractual stipulation with Nefarico™ (the fictional soap company that owns Hussalonia), is known only as The Hussalonia Founder. Hussalonia has released albums of soap jingles, radio dramas, robot singers, faux-metal, power pop, lo-fi acoustic pop, sound collage, Scott Joplin arrangements, Eastern European Anthems, and noise-funk. It’s a conceptual art project, offering a vast, sprawling oeuvre of over 400 songs intended to appeal to the introverted, crate-digging, discovery-driven, literate music nerd.

NONDUM IN AUGE, Hussalonia’s 48th release on Bandcamp, offers a rather straight-forward album of Americana-tinged, melancholic, alternative rock about loss and hope. Unlike previous Hussalonia albums which rely heavily on the multi-tracking process necessary for a solo recording artist, the basic tracks of NONDUM IN AUGE were recorded live in The Hussalonia Founder’s basement in the summer of 2018 with Drummer-composer-visual artist Rob Lynch and bassist-composer-designer Jonathan Hughes who have played on a number of previous Hussalonia releases (see: 2010’s DEEP IN A DONUT DREAM, 2016’s MY DEAD TOOTH, and 2019’s PHIL). While overdubs were later added, there was a concentrated effort to preserve the live sound of three people making music in a low-ceilinged, hole in the ground. It’s an album that is several years in the making, interrupted by crippling bouts of depression and anxiety surrounding the state of the nation. How does one function normally in a tailspin of chaos? One doesn’t.

Nondum In Auge is a Latin phrase which can be translated to mean: not yet at its zenith. It’s a sentiment that, if one were feeling hopeful, could apply to the United States. That it’s being offered in a dead language adds a gut punch of pathos — all things, no matter how orchestrated and engineered, must pass. Loss and hope! Loss and hope! Too, I suppose, it’s a phrase that could apply to Hussalonia itself. Still toiling in willful obscurity after 23 years, Hussalonia has not yet reached the height of its popularity or, let’s hope, potential.